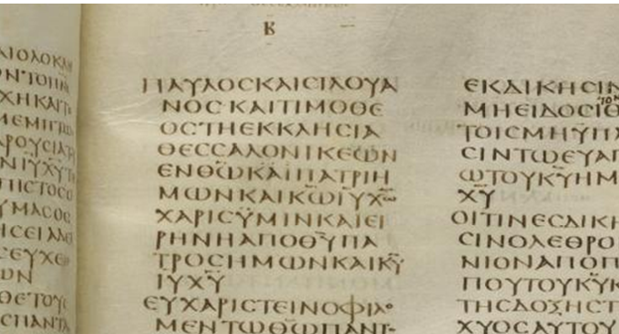 Most Christian scholars use what is called the Critical Edition of the Greek New Testament, and almost all modern versions are based upon it. There are several camps that prefer other editions, the Textus receptus or the Majority Text. Some do so because of a belief that it better represents the original; I think they are mistaken, but respect their view. Others promote one conspiracy theory or another: The modern editors are motivated by a desire to remove Christ from the New Testament! They are in league with the Pope (or the Illuminati or the Masons) to destroy God’s Word! That the NIV New Testament strikes out the name of the Lord Jesus 178 times, and that, so goes the theory, its editors did so as a blatant attack against his person or authority or incarnation.

Does that theory hold up? As a test case we will examine the brief epistle of 2 Thessalonians. Christ is referenced some 22 times. Of these, 18 times show no difference whatever between the 1550 Elzevir version of the Textus receptus and the latest critical edition, Nestle-Aland 27th.[1]

What of the four verses that do show a difference between the editions? There is hardly any noticeable plot to cut Christ out of the message of the letter:

Of the 22 examples in 2 Thessalonians, the main significant difference is from “Day of Christ” to “Day of the Lord” in the critical text. Twice “Lord Jesus Christ” becomes “Lord Jesus” but the critical text leaves in “Christ” the other 9 times! The other change actually expands the divine name from “the Lord” to “the Lord Jesus”. These sorts of data try the imagination of the conspiracy theorist, who must explain why those in the plot to take Christ out of the Bible did such slipshod work.