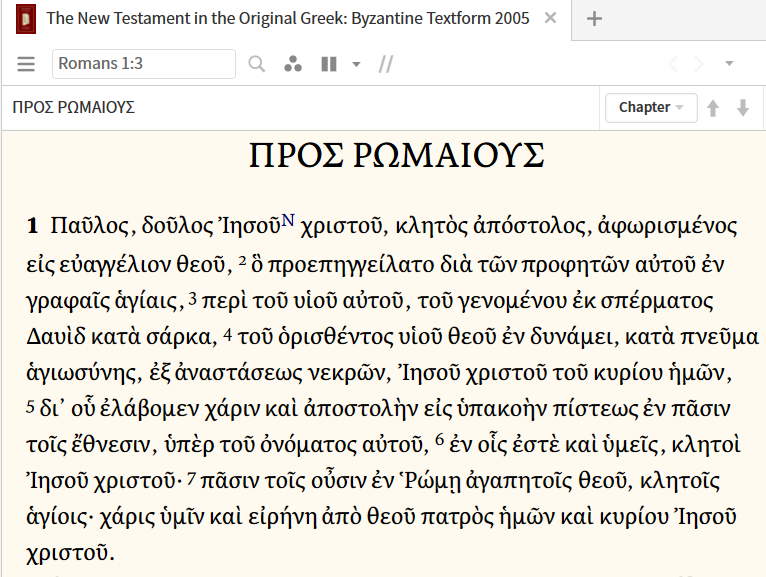 I am committed to using the very best edition of the Greek New Testament. At this moment, I accept as best the Nestle-Aland 28th edition (NA-28; I do not say this to put down the SBL or the Tyndale House New Testaments, but that is an issue for another day).

Thus I am dumbfounded by sites such as one I just ran across (“Gnostic Corruptions in the Nestle-Aland Greek Testament”), written by a person who does not have any obvious acquaintance with the NA-28 nor, come to think of it, with Gnosticism. In other words, he and others like him believe that I am wickedly and cynically using an impostor Greek New Testament and the versions based on it (NIV, ESV, NASB, etc.), while being well aware that they are all the work of the devil. Obviously I find this objectionable, but beyond being personally insulting, it is an example of how erratic teachers are eroding people’s confidence in the inspired Word of God.

I bring this up because, from the way some people carry on, one would think that someone has gone around rewriting the New Testament to make it suit some Gnostic-Illuminati-Masonic-New Age-Lesbian-NWO-reptilian agenda! (I am not making up these adjectives).

Someone earlier today asked me about the New Testament in the Original Greek: Byzantine Greek Form by Maurice Robinson. This edition is based on the (to me, improbable) belief that instead of basing our Greek New Testament on its most ancient copies, that we should take our cue from the more recent and more plentiful copies to tell us what the apostles wrote.  I do not find the Robinson text objectionable – it is the Bible, after all! – but as I said, I do not think it is the best available. And to be clear, Robinson does not subscribe to any of these weird theories we have listed.

I have a digital copy of the Robinson 2005 edition on Logos, and so I looked up some material to see what I would find.

So let’s compare just one paragraph chosen at random from the Nestle-Aland 28 and the Byzantine. You don’t need to be able to read Greek for this exercise.

Here is the Byzantine textform of Romans 1:1-7 –

There is one tiny difference between the editions. The Byzantine text has Ιησου Χριστου. The Nestle Aland has Χριστου Ιησου. That is, according to one text Paul is the servant of Jesus Christ; in the other, he calls himself a servant of Christ Jesus. The Byzantine text has a superscript N that signals the some manuscripts have a different reading; the squiggly marks that bracket the words in NA-28 signal the same thing.

I suppose that if someone were open to the most improbable type of conspiracy theory – a Beautiful Mind who is able to decode hidden Illuminati messages in every Superbowl halftime show, let’s say – then they could “uncover” some sort of Gnostic-Illuminati-Homosexual-Reptilian-New Age hidden message in that small difference. “The REAL Romans says Jesus Christ! And the Gnostics, using the incredible subtlety of a laser scalpel, switched the words in order to say Christ Jesus, elevating [who knows?] his messiahship above his humanity,” or some such plot. This would ignore, of course, that Paul throughout his epistles sometimes said “Christ Jesus” and sometimes “Jesus Christ” and sometimes “Jesus” or “Christ” or something else, and that all are apparently apostolic and legitimate; in fact, he says “Jesus Christ” in 1:4 and 1:7. And it also ignores that if scribes are going to make an error in copying the Bible, accidentally swapping out one title for the other is going to be a natural mistake.

I accept NA-28, and therefore conclude that when Paul dictated the epistle to Tertius, he said “Christ Jesus”. And that it is of some very small exegetical benefit to know that that is what he meant to say.

That’s it! No huge conspiracy, no rewriting of the Bible, no destruction of the Word. The critical text has the same Christ, the same gospel, as do all manuscripts:

Paul, a bondservant of Jesus Christ [or Christ Jesus!], called to be an apostle, separated to the gospel of God which He promised before through His prophets in the Holy Scriptures, concerning His Son Jesus Christ our Lord, who was born of the seed of David according to the flesh, and declared to be the Son of God with power according to the Spirit of holiness, by the resurrection from the dead. Through Him we have received grace and apostleship for obedience to the faith among all nations for His name, among whom you also are the called of Jesus Christ; To all who are in Rome, beloved of God, called to be saints: Grace to you and peace from God our Father and the Lord Jesus Christ.

If someone wishes to object that this is an easy passage, and that in other sections there is more divergence, I accept that. But I did honestly choose the first passage I hit upon. And to have an overarching theory that explains textual divergences, I insist, a conspiracy theorist must come up with a plausible scenario for each and every divergence, not just a couple of dozen.

Let’s stop all this fighting and get ourselves into the Word of God!