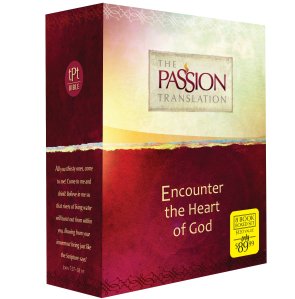 [UPDATE: in February 2022, BibleGateway removed The Passion Translation from its website. Note that this was the one it removed of all the 90 versions available.]

I was only recently alerted to this new edition, which seems to have become all the rage in some ministries, especially Pentecostal ones. As is often the case with one-person translations, its author promotes it as the very epitome of Bible translation! I will depend here on the extensive and careful analysis of the Psalms section, as reviewed by world-class Old Testament scholar Andrew G. Shead. Like him, I am concerned that some preachers are using this version almost as a cultic totem. Enjoy!

Shead on the Psalms TPT: TPT is not just a new translation; it is a new text, and its authority derives solely from its creator. Like Joseph Smith and The Book of Mormon, Brian Simmons has created a new scripture with the potential to rule as canon over a new sect. Judging from The Psalms alone, I would say that it would be a Christian sect, and that unlike the Mormon cult its scriptures will point its adherents to saving faith in God the Son, the crucified and risen Lord Jesus. But TPT is not a Bible, and any church that treats it as such and receives it as canon will, by that very action, turn itself into an unorthodox sect. If the translation had been packaged as a commentary on Scripture I would not have needed to write this review; but to package it as Scripture is an offence against God. Every believer who is taught to treat it as the enscripturated words of God is in spiritual danger, not least because of the sentimentalised portrait of God that TPT Psalms sets out to paint. Simmons’s caricature of God as ‘the King who likes and enjoys you’ (‘Introduction’, p. 5) eliminates all but one facet of God’s feelings about us, and then gets that one wrong.

Here is an analysis of the TPT New Testament, by Andrew Wilson.To quote him:

But the result, for a variety of reasons, is not good. I wouldn’t recommend people use TPT, and if they do, I would recommend they recognise that a) it is not actually a translation, and b) they use other versions as their primary texts for study. I’d also suggest that pastors who have TPT-users in their congregations should clarify the difference between it and the standard translations, just to bring some definition (and that this clarification need not be accompanied by arm-waving or mouth-foaming!) God’s love language is not hidden, or missing; it is in plain sight in the many excellent translations we have available.

Gary again: Simmons has done some work with translation in Panama, but for technical reasons we won’t go into, this does not make him qualified to produce a one-man Bible translation from the biblical languages into English. The endorsements of the version on its website come mainly from Christian celebrities and “best-selling authors”, but ominously absent are people who understand Bible languages and their translation: for example, Bill Johnson of Bethel Church calls it “One of the greatest things to happen with Bible translation in my lifetime.”

This is not just a question of scholars looking down their noses at a version they themselves didn’t produce. In fact, Wilson has committed some very basic errors in his understanding of the New Testament text, what the Aramaic language is (he confuses 1st-century Aramaic with Syriac), and how language works. It is at the very best, a paraphrase – not even as good as Peterson’s The Message, which has its own problems – or better a commentary on the Bible. It is not the Bible.