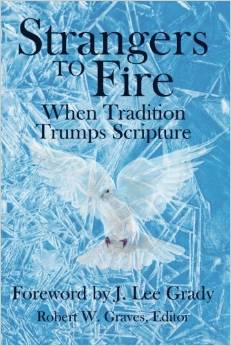 They have just published a pair if my essays in Strangers to Fire: When Tradition Trumps Scripture. It’s now available on Amazon. You might recognize the title as a response to John MacArthur’s book, Strange Fire: The Danger of Offending the Holy Spirit with Counterfeit Worship.

The contributors of these 35 essays are not the sort of televangelists I usually object to, but top Pentecostal scholars who are taking a stand against abuses such as faux apostles, the Prosperity Gospel, and Onenness Pentecostalism. They are exactly the guys who are alarmed by “counterfeit worship”. They are also unhappy that MacArthur lumps them together with these false teachers; in part that is why they produced scholarly papers as a refutation to Strange Fire‘s unfortunate accusations. New Testament scholar Craig Keener leads off the collection with a clear and irenic critique of MacArthur’s use of Scripture in Strange Fire.

John MacArthur has been criticized, and rightly so, for the harsh tone he took in Strange Fire. While a whole book could be written on that theme, this volume takes him to task for his handling of Scripture, his appeal to personal experience to establish doctrine – which practice he condemns when Pentecostals practice it – his false logic and, in the case of my essays, his limited knowledge of early church history. No-one is criticizing MacArthur’s high esteem of careful exegesis, but rather for failing to live up to his own standard: hence the sub-title, “When Tradition Trumps Scripture”.

When one is offering a judgment about whether a billion people are genuine believers, then sloppy investigation is no mere academic misdemeanor, like a inaccurate footnote or a handful of misspellings.

In one of life’s strange twists, these brethren asked me, a non-Pentecostal, to contribute a couple pieces on the work of the Spirit both in the early church and now. They state that “Although not a Pentecostal, he is concerned that Bible scholars show care in exegeting and interpreting the Scriptures.” These are articles I wrote, one many years ago as a response to B. B. Warfield and the other last year to Cleon Rogers, in which I try to demonstrate that manifestations of tongues and prophecy co-existed side by side with a closed set of apostolic literature in the 2nd century AD before disappearing in the early 3rd century.

John MacArthur concluded Strange Fire with “An Open Letter to My Continuationist Friends,” an essay that does not grow less grievous upon repeated readings. He implies that non-Pentecostals should not publish exegesis that might in any way be co-opted to bolster the Pentecostal position, no matter how well based in Scripture. He refers specifically to two of the most respectable exegetes of Scripture and preachers of sound doctrine today, D. A. Carson and John Piper, and concludes that “Whoever compromises with the error and subjectivism of charismatic theology allows the enemy into the camp.” (Strange Fire, p. 247; visit HERE to read Piper’s response). My small contributions to Strangers to Fire fall, I guess, into this supposed category of “aiding and abetting the enemy”, even though they are based on careful exegesis and historical study. I cannot agree that a black-and-white stance is the way we will gain the victory over the corrosive versions of Pentecostalism.

Both of my articles are available here:

Christian Prophecy and Canon in the Second Century: A response to B. B. Warfield

The Gift of Tongues in the Post-Apostolic Church: A rejoinder to Cleon Rogers

And a third article, which didn’t make it into the book because of copyright restrictions:

7 thoughts on “Two of my essays included in a new collection!”