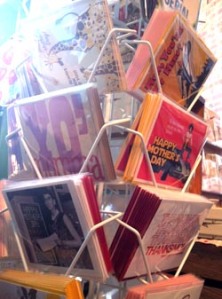 (please feel free to use this for a sermon on Mother’s Day, adding in stories of mothers you know)

Let’s take a stroll past the Mother’s Day card rack:

For Mother
For Mother, Sentimental
For Mother, Loving
For Mother, Humorous (that category is potentially hazardous)
For Mother, Respectful (these seem to be very carefully worded)
For Mother with a recorded message on digital chip.

Then in an effort to sell more cards, we run across a section: “for someone who is like a mother to me.” It’s a great idea: there are literal mothers, then there is a whole world of aunts, grandmothers, cousins, in-laws, dear friends, mentors, an army of women.

We acted how a devoted child-care provider might cherish her very own little ones.
So then, because we had this longing for you,
we determined to share with you
not only the gospel of God
but also our very selves,
because you had become beloved to us.

For you remember, brothers and sisters, our labor and our hardship,
how night and day we worked, so as not to be a burden to any one of you; that’s how we proclaimed to you the gospel of God! [1]

This key phrase in v. 7, “a devoted child-care provider”. You might be wondering, no how come you’ve never heard that in the Bible before? The word he uses for “nursing mother” probably speaks of a woman who was hired to care for someone else’s babies, a hired nurse or a servant.

Now, in Paul’s illustration, the nurse is not taking care of someone else’s children, but her own children, and the language used for “children” is “little ones”, babies and toddlers. For example, the NRSV has “like a nurse tenderly caring for her own children.”

So, if we unpack this all, the apostle is using this illustration:

You see: contrary to popular belief, an apostle is not just being macho and casting out demons and yelling at false teachers. Serving as an apostle – or any Christian who helps others – is also asking yourself: “What would a mother do?”

Suppose you wanted to train the perfect disciples; in theory, what would you do? Well, you might determine to get them early in their spiritual formation, as young as possible; you might have them live with you, so they can see how a Christian lives day in and out; you might teach them the Bible over a long period of time; stop them when they took a wrong direction.

You see where I’m going? Let’s start with the literal moms here: You have the golden opportunity to shape lives; you will never be able to disciple anyone, help anyone, train anyone like you can right now.

Meet EUNICE AND LOIS, who raised Timothy, who in turn helped “mother” the Thessalonians. Paul mentions his mother and grandmother in 2 Tim 1:3, “I am reminded of your sincere faith, a faith that dwelt first in your grandmother Lois and your mother Eunice and now, I am sure, dwells in you as well.”

Also in 3:15, he states that “from childhood you have known the Scriptures”. We know from the book of Acts that Timothy’s father was not a believer, and so little Timothy apparently couldn’t go to synagogue or Hebrew school. That means, if he knew anything about his faith, it came from his mother or his grandmother. They probably didn’t own their own Bible, and couldn’t have read it if they did – it was all done by memory.

So, what does a mother do? FIND a way where there is no way.

Where would he have learned God’s ways if they hadn’t taught him? Where will your children learn God’s ways unless you see to it? And I’m not ignoring the father’s role, which is key; I’m just ignoring it for a few minutes.

Meet MY OWN MOTHER: My grandmother sometimes kids me that when I was young, “you always had a book in your hand”. I’ve read books constantly, usually 4-5 at a time, since I could manage to sound it out; and I’ve gone on to write several. And I know pretty much where I got that bug from. Because MY visual memory from early childhood is my mother and us with a book in her hand, reading to us. I don’t recall her ever saying “You should appreciate books!” I do recall her taking us, as soon as we were old enough, to a tiny one-room library near our house, and letting us pick out our own books. “Green Eggs and Ham”; “Henry Huggins”; later on “The Hardy Boys and the Tower Treasure”. Deep theological books.

What would mother do? Don’t just tell kids what to do, MODEL how people should live. Paul, in 1 Thess 1:6 says they taught by example, so “In your turn you became imitators of [the pattern given by] us.”

There is an idea around today, that somehow it’s better for kids to go up without “religious pressure”, to let them get decide when they’re older. But remember that a lack of direction IS a form of direction; you’re telling them to go nowhere with God, that it’s nothing urgent.

Children don’t do well by letting them run wild spiritually; you’re cutting them off from the help they’ll need later on! They’re burning habits and ways of thinking into their young minds right now.

Meet MONICA, a North African woman, who lived in the AD 300s. She came from a Christian family, but for some reason married a man who wasn’t a believer and who had a violent temper. She had three children. Eventually, she led her three children and her husband to the Lord. Her oldest, a boy named Augustine, was the holdout; he took his time coming to Christ. He wandered around, he lived with a woman, he was a real piece of work. Monica kept on him.

Historians suggest that Monica was pretty domineering (maybe she would tell us that she did not nag, she persevered!). One day Augustine said he was moving from Africa to Italy; Monica figured, once he gets away from me he’s going to the devil, so this poor woman picked up and moved to Italy, chasing after him. She prayed the same way, telling the Lord over and over that he just had to save her son. In Italy, with her present, he finally came to Christ. He went on to become a pastor and a theologian. Augustine of Hippo is by some accounts the greatest Christian theologian of all time.

He said of his mother: She was also the servant of God’s servants. Whoever of them knew her, magnified, honored and loved God because of her, since they perceived that God was in her heart. [2]

What would a mother do? PRAY and refuse to give up. In fact, Paul said that “night and day we worked” (2:9)

If you have little ones – or grown-up children – then before you go looking for someone else to disciple, make sure you’re fulfilling your task toward your current disciples. Maybe your children are grown up and moved away; maybe you don’t have children, and there’s a heaviness that you carry because of it. But think of the truth of being “like a mother” – look around, and attract young people to yourself, and do for them what Paul did for his disciples.

So what if you’re not a theologian: Christ has given you a clear, direct commission to shape the lives of people, and circumstances that would make disciplers green with envy.

“What would a mother do?” Let’s meet REBECCA: a woman about my age, who is in many ways accomplished: she has published many books, is a historian, novelist and conference speaker (here is her website: http://rebeccapricejanney.com/). After many years she and her husband had a baby boy, to whom they are devoted, he’s now 8. I asked Dr. Rebecca for a quote:

Since I became a mother, I have been in a constant state of reliance upon God’s wisdom. I wasn’t used to being quite so needy–I did well in the work force and in academia–but being a mom was something else. For that I felt so inadequate at times, and still do. Thankfully, God invites us to depend on his wisdom, and he doesn’t get mad at us for not having it. He seems to delight in my asking and I am most grateful for all that he gives me. Being a mom is the most wonderful experience, and one that reminds me how much I must depend on my heavenly Father.

What would a mother do? ASK God to show you what to do. And didn’t Paul say how he prayed for his disciples?

FIND a way where there is no way

MODEL how people should live

PRAY and refuse to give up

ASK God to show you what to do

Like a father, yes, but “like a mother” too, there’s your method. And mothers; and brothers, fathers, uncles – there’s your blueprint too.

[1] 1 Thess 2:7 contains a difficult problem; it isn’t a question of translation, but a textual one, over whether Paul used the word epioi (“gentle”) or nepioi (“infants”). Most English versions have it that “we were gentle among you.” The CEV, NET, NIV 2011 (but not NIV 1984) and NLT have something along the lines of “we took the position of little children or infants among you.” It is this second text that the Nestle-Aland 27th edition follows, and I am convinced that it is correct. See Shogren, 1-2 Thessalonians, ZECNT (Grand Rapids: Zondervan, 2012), 99-104.

“What Would a Mother Do?” [Studies in 1 Thessalonians], by Gary Shogren, PhD in New Testament Exegesis, Professor at Seminario ESEPA, San José, Costa Rica

2 thoughts on “What Would a Mother Do? [Studies in Thessalonians]”