(Thanks to Paul D. Adams of for bringing this to my attention! Check out Paul’s blog at http: http://inchristus.com/. I also recommend the series that starts with my essay: “But the Greek REALLY says…”: Why Hebrew and Greek are not needed in the pulpit, Part 1)

F. F. Bruce was the prime mover of the renaissance of evangelical New Testament study in the English-speaking world that began after the Second World War and continues to today. He was also known as a humble man, who loved God’s people. 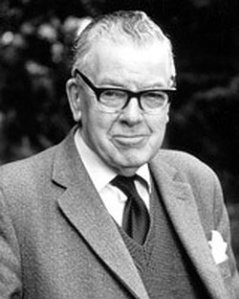 There is a story told of A.S. Peake writing a Greek word on the blackboard of his Manchester classroom, and one of his students saying, ‘You needn’t write it down, Doctor; we know Greek.’ To which he replied, ‘I wish I did.’

To know a language, even an ancient language, involves having such a feeling for its usage that one can tell, almost as by instinct, whether a construction is permissible or not, or whether a translation is possible or not.

Translation is not simply a matter of looking up a word in a dictionary and selecting the equivalent which one would like to find in a particular passage.

It is this manifest mastery of Greek usage which makes William Kelly’s New Testament commentaries, especially those on Paul’s epistles, so valuable. ‘And you know what is restraining him now,’ says the RSV of 2 Thessalonians 2:6, following some earlier interpreters. This construing of ‘now’ with ‘what is restraining’ Kelly describes as a solecism, pointing out that the ‘now’ is ‘simply resumptive’.[1] Kelly is right. But how did he discover that the construction of the adverb with ‘what is restraining’ is a solecism? No grammar-book or dictionary would tell him that; it was his wide and accurate acquaintance with Greek usage that made it plain to him, an acquaintance which is the fruit of long and patient study.” (F. F. Bruce, In Retrospect: Remembrance of things past, p. 293)

See also Women in Ministry according to F. F. Bruce

7 thoughts on “Thoughts on Greek from a Scholar: F. F. Bruce”