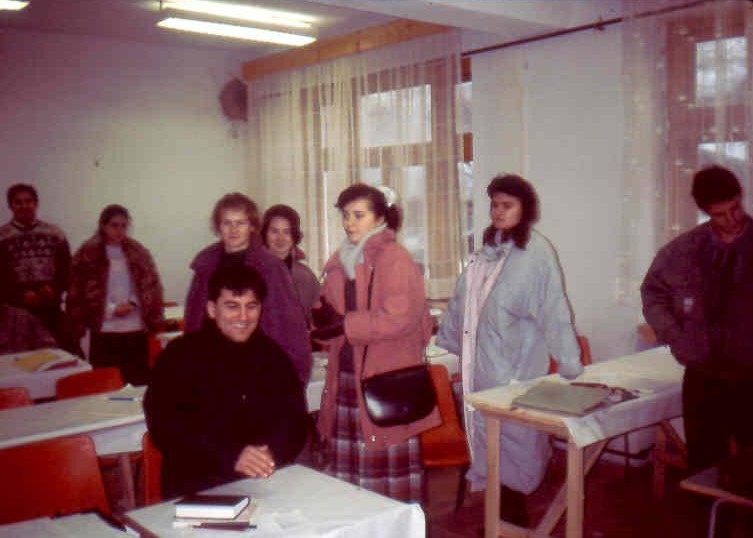 The city of Bucharest in December, 1994 was celebrating the 5th anniversary of Ceauşescu’s overthrow. I attended another celebration, the grand opening of the first Pizza Hut in Romania. It was also frigid cold.

I was teaching Greek 1 at Timotheus Bible College. The building was still only a shell. It had sporadic electricity, but was without indoor plumbing, doors, heat, and in some cases, walls. I hadn’t known to bring boots, so my feet turned numb as I stood for hours on cold concrete. We had a fire burning in a covered 55-gallon drum. One memorable morning I illustrated some fine point of Greek with a dramatic sweeping gesture, and knocked loose the stove-pipe, filling the room with smoke until some guys managed to re-attach it. The power would go on and off. Cats padded in and out. Snow drifted in the hallways.

After class was lunchtime, and the volunteer ladies would bring in a typical meal of ciorba (CHORE-buh; a thin vegetable soup), bread and, for our vegetable, pickled tomatoes.

That was my mission.

And I loved it. As it turned out, they invited me back three times, once more in winter and twice in summer, adding Greek 2 and later Bible Interpretation to my teaching load.

My host, Ion, was an engineer who had helped to design the country’s railroads – and had also spent months in jail under the communists. He took me around to different places, where I preached. Ion’s own church met in a bowling alley, likewise unheated and without lighting. The congregation sat huddled on the spectator benches; I used the scoring table as my pulpit, my back to the lanes. Steam blew from my mouth as I talked about the shepherds in the field, watching their flocks by night.

In the summers we visited the mountains of Transylvania, where I preached in some Brethren assemblies. One time, I went in the only clothes I had with me, a T-shirt and torn jeans. We popped into

the meeting, which had apparently been going for some time. Ion quickly negotiated with one of the elders, and then gave me a surprise: “Okay, you’ll be preaching; in about 5 minutes”. The most I could do was swap my sandals with a friend whose shoes fit me. I started my sermon by apologizing for dressing down: these Brethren, like country folk in many countries, went to church in their best clothes.

A missionary adapts, I learned, or quickly falls apart and becomes an ex-missionary. Stay relaxed, walk with God, and embrace the unexpected. I learned a second truth as well, that is, look for appropriate ministry: God has jobs for every kind of person, in my case, a professor. These two principles might appear contradictory, but they are both taught in the Bible (think the apostle Paul) and my experience confirms them.

By the time I was on my final trip to Romania, Karen and I were already laying plans to go on the mission field permanently: I would serve as New Testament professor at ESEPA Bible College and Seminary in San José, Costa Rica (www.esepa.org). There is a rightness in this task to which the Lord has called us, for which I give thanks. I had only picked up a little Romanian; this time we took the longer path and learned Spanish properly. The first time I taught in Costa Rica was in Spanish, a talk on the book of Acts that I’d written out and had thoroughly checked over by my language teacher. And I stay flexible (I teach; I also do things like raise funds for ESEPA, paint classrooms, and work in administration). I say “yes” to many things I don’t normally do. And I say “no” to things – including many worthwhile things – that would distract me from my main task. I’m entirely pleased that we’ve been in Latin America for 12 years now; still, mulţumesc, Lord, many thanks for Bucharest.

ADDENDUM: the reader may enjoy this essay, “How Did Paul Know Where he was Supposed to Go?”