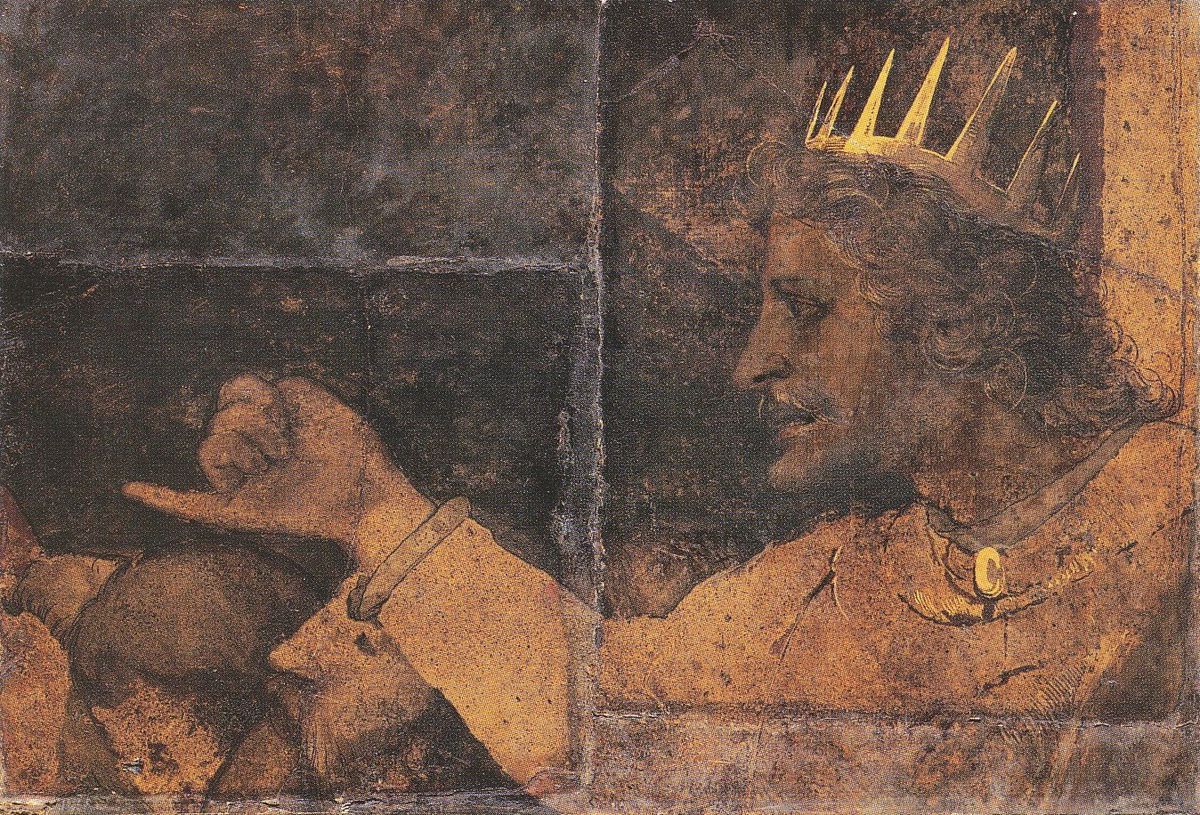 1 Kings 12, which I am editing today for the SUN Old Testament.

New king Rehoboam faces a revolt in Israel, and we know that God has planned that the rebels be successful.

He consults with the older men, his father’s advisors, the “elders.” They advise caution. They say, be patient; be flexible with the rebels today, don’t try to prove that you’re the big guy; you will win them over, defuse the situation, and they will follow you forever after.

He then consults with his contemporaries. The young men advise decisiveness. They say, crack down on them today, show them who is boss, and quash the rebellion forever. An interesting note: Oriental potentates took extreme measures to not show weakness. It was a macho culture, and the young men agreed with the world: “we know that the weak lose, the strong win.”

Rehoboam follows the latter advice and it ends in disaster.

ONE READING of this is, “Follow the advice of the more experienced grey-haired, not of brash young bucks.” And that is indeed one lesson of the chapter, which implies that the young men were foolish. On the other hand, the lesson in earlier chapters of 1 Kings is that Solomon became more foolish the older he got.

Nevertheless: The older men urged flexibility, I suggest, not because it is always the right approach; on another day, perhaps they would have stated that decisiveness was the right move!

So how did the older men know that flexibility was correct in this instance?

My guess is that, the older counselors did not automatically counsel flexibility just because they were old and timid. Nor did they shun decisiveness, assuming that that never works. No, they counseled flexibility BECAUSE THEY HAD READ THE SITUATION and decided that, today, given this context, given this set of participants, Solution A will solve Problem X, whereas Solution B will not, not this time.

Solomon leapt into fame when he decided which mother was telling the truth about which baby was hers. In his heyday, Solomon would have known which counselors to listen to. Rehoboam did not have his father Solomon’s wisdom, and could not tell whether flexibility or decisiveness was the right path for that moment. He followed his adrenal gland, not divine wisdom.

An Important Application for today: I have just now finished a course from Safeguard from Abuse: Child Sexual Abuse Training Online. I urge you and your ministry to take it! It will leave the student stunned, but one hopes, spurred to decisive action. I cannot recommend it too highly, and those of you who know my wife Karen know that preventing sexual abuse is her primary ministry. So – how does the story of Rehoboam help us? Well, in his case, one committee suggested flexibility, patience, reasonableness, delay. The other committee, rash though they were, urged immediate, decisive action. Here is one application: for too long, the church (Catholic or evangelical or other) has been criminally indecisive. It has silenced or undermined those who claim to be abused in their church or youth group or camp. Accusations are superficially examined, if at all. It’s simply too difficult and uncomfortable to seek the truth! After all, “Phil is great with the teens, a real buddy to them, he would never do such a thing!” Or “Well, you know, kids have such overactive imaginations.” (Fact – when kids say an adult is abusing them sexually, a mere 2% is lying! Do the math!) Or “Thousands of people come to this church [and donate to it!] because of Pastor Bob! He’s too big to fail!” (Another version, which brought down the pastor of Mars Hill, is that a certain level of misogynistic emotional abuse is acceptable). Of course, in the Catholic church, priests have simply been reassigned to try to cover things up, often various times. Here is an area where immediate and decisive action is indicated, following a pre-arranged course of action. A child who shows symptoms of physical or sexual or emotional abuse must know that he or she will be heard and paid attention to. That is why, in our mission, WorldVenture, they are setting up a network, where every single child is carefully made aware: if you have anything to report, THIS is who you talk to. Flexibility and mildness about reporting abuse is not the sign of a “cool head’: it is footdragging against righteousness; it is a is sin – and in most states in the USA, failure to report is against the law! (Note: the correct course of action is to inform legal or social authorities, immediately; the incorrect course is to say “Well, Matthew 16, you know. We’ll talk it over with the accused, hear his side of it, and – most likely – warn him to not give the wrong impression in the future.”)

Examples from American History. In January 1776, in his tract Common Sense, Thomas Paine argued for a decisive, immediate break against the Crown. Others were arguing caution and negotiation. Paine proved to the satisfaction of many readers that caution would be fatal for the cause. The Continental Congress followed Paine’s counsel and in July voted for independence. In October 1962, Kennedy was faced with the crisis of Soviet missiles being installed in Cuba. Some advised Kennedy that the US invade Cuba. Some advised a diplomatic solution. Some advised a naval blockade of Cuba paired with continued diplomacy. The story of how Kennedy eventually chose the third solution is a fascinating one.

2 thoughts on ““Wisdom” does not yield just one solution”