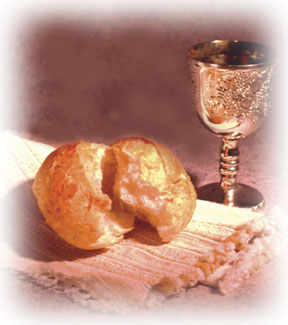 In the Catholic church, the celebration of mass is the high point of the week’s services, and the worship service is often simply called “the mass”. Some Protestant worship services, too, focus on the sacrament, notably in Episcopalian/Anglican churches.

In reacting against Rome have we evangelicals drifted away from the Bible and pushed communion into a dim corner? In traditional European or North American churches,

communion has a role, but it is overshadowed by other (vital!) activities such as worship and preaching. Some celebrate communion monthly, some quarterly, some annually, some not at all. In my experience in Latin American churches, where the worship service may be two or three or four hours long, the time for communion does not expand proportionally: at 15 minutes, maybe once a month, it is a relatively tiny blip.

And, after all the investment of time and energy in preparing the worship and the message, do the leaders of the church heave a sigh of relief that at least communion is uncomplicated and can run on autopilot?

The Bible tells us, first that the Lord’s Supper is a memorial, a most excellent way to make each worship service be about cross of Christ (1 Cor 2:2) and not on the preacher’s eloquence or on the musical skill of the worship leaders. A second purpose is that it forces each believer to a spiritual crisis week by week: I must now confess my sins if I’m going to participate. According to 1 Corinthians 10-11, communion also reminds us of the union of each member in the body of Christ (10:17; 11:33). In the bread and wine we remember that it is impossible to love God and not love his people. Sharing in one bread ought to shake us out of the cult of individualism in which modern believers fall.[1]

For truths such as these, surely we can carve out a healthy slice of time to celebrate the Lord’s Supper as the early church did, that is, every week. Communion can be made a part of the worship, or before or after the message. It can include a special time of confession, or a time of fellowship, or a time of silent prayer. What if it were announced, based on 1 Corinthians 11: “Look around, each one of you, at the people in this room. If you have anything against anyone, or even any doubts about your relationship, then would you walk over to that person during this time and take whatever time you need to be reconciled.” Or you could have people pray in groups or two and three and then take communion together. What if you had everyone spend time in praying the old prayer, “thy kingdom come,” based on the eschatological aspect of communion: “do this until he comes.”

The Lord’s Supper summons us to:

Look back – to the death of Christ

Look within – to examine our hearts

Look upward – to God, in confession and thanksgiving

Look around – at God’s people

Look outward – to invite the world to the cross

1 Calvin, Institutes 4.17.38, 40, is superb on these points. For example, in section 38 – “The Lord intended [communion] to be a kind of exhortation, than which no other could urge or animate us more strongly, both to purity and holiness of life, and also to charity, peace, and concord. For the Lord there communicates his body so that he may become altogether one with us, and we with him. Moreover, since he has only one body of which he makes us all to be partakers, we must necessarily, by this participation, all become one body. This unity is represented by the bread which is exhibited in the sacrament. As it is composed of many grains, so mingled together, that one cannot be distinguished from another; so ought our minds to be so cordially united, as not to allow of any dissension or division. This I prefer giving in the words of Paul: “The cup of blessing which we bless, is it not the communion of the blood of Christ? The bread which we break, is it not the communion of the body of Christ? For we being many, are one bread and one body, for we are all partakers of that one bread,” (1 Cor. 10:15, 16.) We shall have profited admirably in the sacrament, if the thought shall have been impressed and engraven on our minds, that none of our brethren is hurt, despised, rejected, injured, or in any way offended, without our, at the same time, hurting, despising, and injuring Christ; that we cannot have dissension with our brethren, without at the same time dissenting from Christ; that we cannot love Christ without loving our brethren; that the same care we take of our own body we ought to take of that of our brethren, who are members of our body; that as no part of our body suffers pain without extending to the other parts, so every evil which our brother suffers ought to excite our compassion. Wherefore Augustine not inappropriately often terms this sacrament the bond of charity. What stronger stimulus could be employed to excite mutual charity, than when Christ, presenting himself to us, not only invites us by his example to give and devote ourselves mutually to each other, but inasmuch as he makes himself common to all, also makes us all to be one in him.

Studies in 1 Corinthians by Gary Shogren

9 thoughts on “The Lord’s Supper: one invitation you don’t want to miss [Studies in 1 Corinthians]”