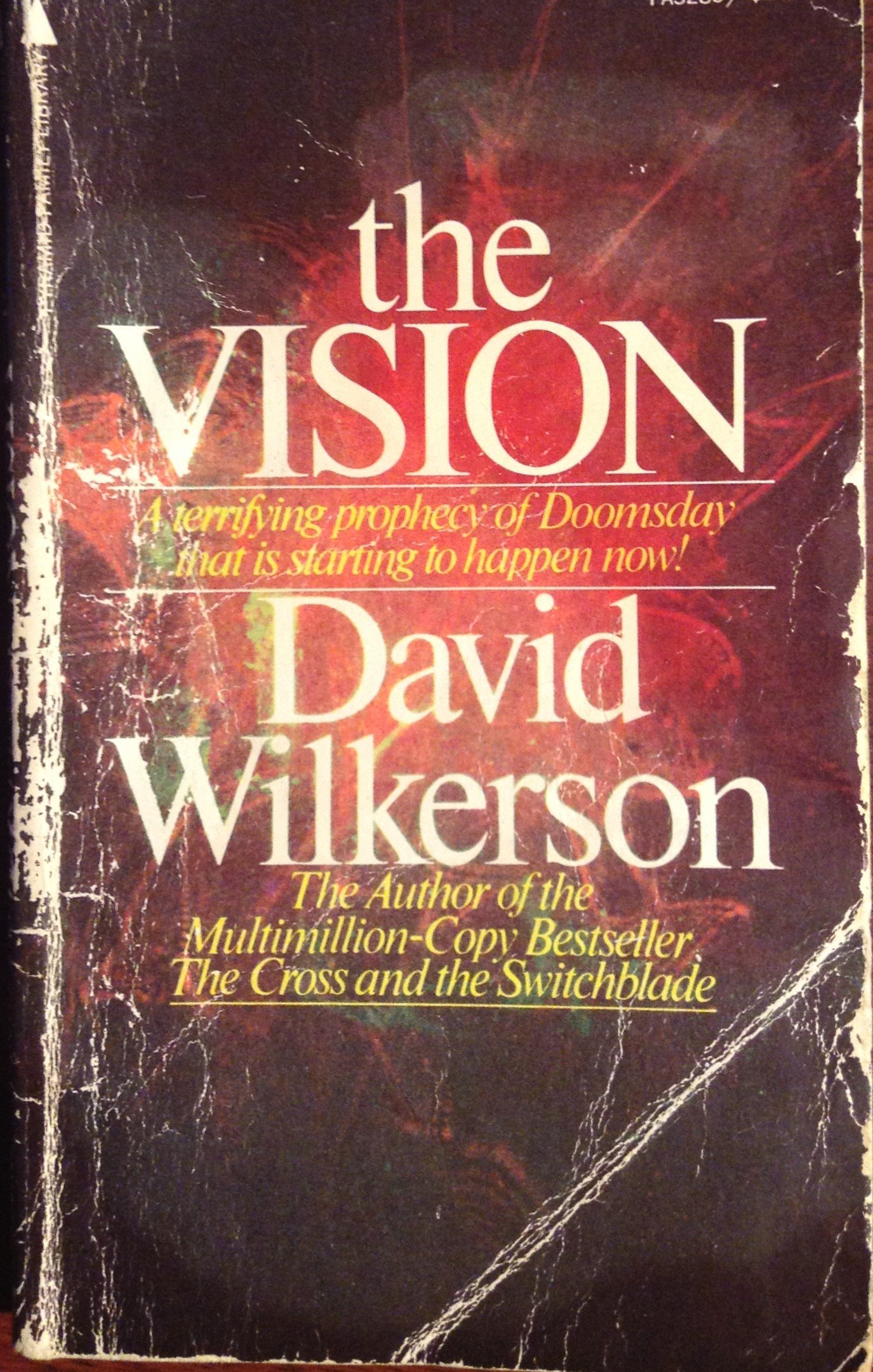 Beware of those who are trying to resurrect David Wilkerson’s The Vision, where in 1973 he supposedly predicted Coronavirus.

He did not, not by a long shot. 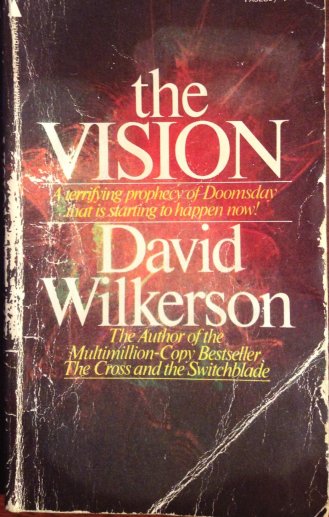 What he ACTUALLY said was quite different. Most of his “vision” was utterly generic and could be true for any century in human history (“There will be economic troubles!”), and his own applications of the “vision” were items that were already in the headlines of his day, or were general signs that anyone can find by reading the Bible. As in his rhetorical question, “Will there be even worse famines, plagues, earthquakes, floods, and other severe weather changes as clearly described in the Bible?”

From the headlines, he says that, scientists warn of new strains of germs, viruses, and vermin; he repeatedly he comes back to “venereal diseases”, also killer bees and cholera, that is, issues that were already in the headlines in 1973 (see The Vision, p. 103)

The other place he talks in any detail about disease is in connection with plant diseases that cause massive crop failure, “in the not-too-distant future.” (p. 104)

He issued new editions of The Vision over the years, which should also give us pause: John did not have to issue new books of Revelation to “update” what was going to happen. I highly recommend the paper by our friend Bob Newman on the topic: “David Wilkerson’s Vision and Deuteronomy 18.”

Someone has posted on YouTube that Wilkerson before his death in 2011 predicted a pandemic in 2020. In fact, the headline is deceptive, because Wilkerson said absolutely nothing about 2020, nor about pandemics. The video has to do with something else entire.

In The Vision, Wilkerson said that his predictions were for the very near future; but the truth is, most were already happening even as he wrote, and many were never fulfilled. And even if Coronavirus could be made to fit into his “predictions”, I would not call a lag time of a half century the “very near future.” I won’t get into the question of whether God might give a revelation in 1973; it’s enough to say, there isn’t proof that he did do so; and that this “prediction” is no more striking than one which you or I could put together.

This also explains why like The Vision, his later books on prophecy always peg the end of the world to whatever he saw around him at that moment. As his his 1985 book, Set the Trumpet to Thy Mouth: America is the Great Babylon of Revelation 18, because the Harlot is a woman and, you know, there is the Statue of Liberty who is also female. And he predicted that America and Canada would be shortly destroyed by nuclear weapons. Because of punk rock. (For those of you who don’t remember, America didn’t go up in smoke, but punk rock did).

Someone asks, but what about his 1986 prophecy, “I see a plague coming on the world and the bars and church and government will shut down, etc.”? If you haven’t seen it, you will, it’s gone viral.

From what I can see – and I may be wrong – this “prophecy” surfaced for the very first time on April 1-2, 2020! I spent quite a bit of time on Google, and apart for some recent comments that were put on old posts, I found zero reference to the prediction from 1985 through Dec 31, 2019. And no references dated from January, February, March 2020. Only on April 1 – and I don’t think it was meant as a prank! – did Mike Evans announce that he had heard the prediction it in a “private conversation” with Wilkerson back in 1986; he quoted that prediction in a sermon broadcast from his ministry on April 2.

Of course, this absence of evidence is not necessarily evidence of absence, but put me down as skeptical that such a vital prediction lay buried for 34 years. After April 2, the supposed prediction went viral.

At least, until David Wilkerson’s niece shut it down as a hoax!

Julie (Wilkerson) Klose, the niece of Wilkerson, has gone public saying that this prediction is inaccurate. Someone created it, with a pastiche of phrases from Wilkerson, but he never said this as such, not that anyone has proof for. 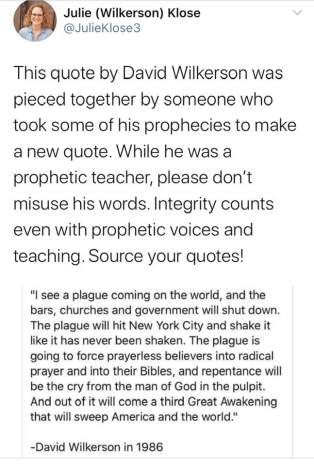 Some might think it is a trivial point, to determine who said what and when. I do not. First, because we are sternly told to test all prophecies in 1 Thess 5:19-22 and to toss out the false ones. Paul also told the Thessalonians not to be panicked by supposed prophecies. Wilkerson’s prophecy has not been proven true (and that is the real test: not “can you disprove it?” but “can you show it clearly is true?”). It does not matter a whit that he has said “I am not a prophet!” When he has visions and tells us what the future holds and tells us what to do about it, that is a person who sets himself up as a prophet, no matter what he calls himself. Second, he is one of these people who try to send the church of Christ in one direction or another and then backs it up with “fulfilled predictions.”

People might wonder, why would someone years after Wilkerson’s death want to deceive the world with an unsubstantiated prophecy? What would they have to gain? I do not know in this case, and will not give an opinion. But here are facts to consider.

1. The fact that this person and his ministry have now received a ton of attention, publicity that couldn’t be bought, might be an indicator of motive.

2. The fact that, cognitive studies in the past few decades have proven conclusively that people remember events from their past that never happened. This is simply how the human mind works, and it gives the explanation for why, when couples argue, they have two entirely different accounts of what happened and who said what. It would not surprise me at all that someone who met with David Wilkerson in 1986 (where he, apparently, made a prediction about another thing that seemed to come true), would 34 years later in 2020 “remember” that he had gone on to make a second prediction, one that didn’t seem important at the time. (And how in the world didn’t a prediction of worldwide destruction strike either Wilkerson or Evans as worth making public?)

3. The fact that, preachers have been known to stretch the truth in order to make a point, as I explain here.

4. The fact of the near-pathological lack of discernment among prophecy buffs. To give one example, a church in Texas that published the Wilkerson “quote” on their FB page and then retracted it, apologized, but also took the occasion to rail against the “legalists” who objected to the church promoting rumors! I have written extensively on this blog that, if people would analyze all the prophecies that are made over the years and soundly rejected prophets who were proven false, the prophecy-industrial complex would be shut down.

5. The fact that people like to attribute quotes to people they respect; hence all the Abe Lincoln and Albert Einstein quotes on the social media. It is entirely possible that a person who reveres Wilkerson as a true prophet would rework and reapply things he actually said, in order to give a warning to the church today. This is precisely what the apocalyptic writers of Second Temple Judaism did: write “post-dated” predictions, choose a name from antiquity, and “discover” a scroll where Enoch, Moses, Abraham, etc. predicted events that were coming to pass in the real author’s time. This is not a rare occurrence, and it even has a technical name, Vaticinium ex eventu – a “prediction [made only] after the event.”

6. That fact that some believe it’s okay to stretch the truth, if it saves souls or revives the church. No: integrity does matter, and thanks for affirming that, Julie Wilkerson Klose.

As I said, I read The Vision when it first came out – believe it or not, in high school we studied it as serious material in Sunday School – and found it unremarkable. My opinion has only dropped since then. In the meantime, my respect for true biblical prophecy and expectation for the blessed hope has kept growing.

How to Calculate When Jesus will Come, without even being a prophet!