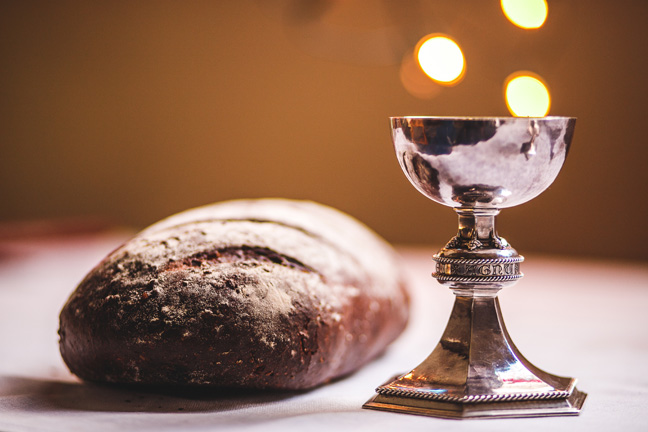 I will share my conclusion up front: of course we do!

And if we are able to settle that, the main issue now becomes one of logistics, not of theology.

First some background. Churches are offering online worship services: Bible studies; small groups. A Mennonite church in Lancaster County, Pennsylvania, is offering drive-through prayer: the pastor said he hoped that non-church people would pay them their first visit, since they would not feel “boxed in” by the physical building.

So, we see the many gifts of God through his church being delivered digitally: the teaching of the Word; worship; prayer.

But where does that leave the missing piece, the Lord’s Supper?

As I have expressed elsewhere, I believe too few evangelicals give proper weight to the Lord’s Supper; therefore, I do not regard “indefinite delay” in celebrating the Lord’s death as an acceptable loss, nor do I think it too difficult to practice the Lord’s Supper under conditions of social distancing.

As Christians, we should let our theology (what should we do?) come first, and drive our ministry; the practical issue (how do we do what we should do?) comes second, once the first is decided.

And I would argue that we have a biblical basis for sharing the Lord’s Supper, even when we are compelled to stay apart. When we are not gathered together physically, there is still a mystical connection between all members of the church of Christ: “For though I am absent in body, yet I am with you in spirit, and I rejoice to see your morale and the firmness of your faith in Christ” (Col 2:5); “For though absent in body, I am present in spirit” (1 Cor 5:3); these verses perhaps having a special application for an apostle, but are still a truth for all believers. This is a link that transcends space, and during times of enforced separation – and only then – it seems a logical leap to add that the dispersed body of Christ can commune with the Lord as a body. As we say in the creed: “I believe in the communion of saints.” This is plenty to give us a working basis.

The Bible has the final word on this. However, the lessons of history also suggest how we might act, since we are not isolated units left to figure things out, but part of a long parade of believers. And history shows that we are certainly not the first Christians to face pandemics.

I suggest these two examples, from the 2nd century with people with regular illnesses, and then from the 16th century with an epidemic worse than COVID-19:

Example 1, Justin Martyr, around the year AD 155, wrote one of the earliest descriptions of a church meeting. He suggests that the Lord’s Supper may be – must be! – taken to the sick and shut-in, after the morning meeting of the church.

Then we all rise together and pray.
When our prayer is ended,
bread and wine are brought,
and the leader of the service
offers prayers and thanksgivings.
The people say, “Amen.”
The bread and wine for which he has given thanks
are then distributed to each person.
Then the deacons take a portion of the bread and wine
to those who are absent.[1]

Note that Justin must be assuming that the Lord’s Supper, which reflects the communion of the saints, is valid over space, but also over time (albeit a relatively brief time). And he seems to believe that the same bread and wine, which after all was blessed in the physical gathering, must be what is shared with those not present.

Example 2, Martin Luther. In 1527, “the plague” was sweeping through Germany. This was not the relatively less lethal Coronavirus, but the dreaded bubonic plague, the one that wiped out much of Europe in the 14th century and had a fatality rate of 30-90%; a person could go to bed feeling perfectly fine and never wake up (the death rate is an average of 2-3% for Coronavirus). Society of course was turned upside-down. During all this, Martin Luther wrote a letter entitled, “Whether One May Flee from a Deadly Plague.” His point was that “Those who are engaged in a spiritual ministry such as preachers and pastors must likewise remain steadfast before the peril of death.” But it is one of his proofs for his belief that interests us today:

For when people are dying,
they most need a spiritual ministry
which strengthens and comforts their consciences
by word and sacrament and in faith overcomes death.[2]

How in practical terms do we serve communion? I can think of a few ways, and if a church conclude that it matters, they should put their heads and hearts to the problem.

Here is one suggestion:

Just to mention it: our neighbors are receiving the Lord’s Supper in other ways: they are taking it as a drive-through at their church; or it is left on the front steps for people to pick up.[3]

I will close with a story that will, I trust, not upset my fellow Protestants, since its lesson is a relevant one. In Graham Greene’s powerful novel, The Power and the Glory, there is widespread persecution in Mexico and all churches have been shuttered. A Catholic priest, whom Graham never names, is being hounded from town to town. He is despondent, since he is unable to serve Mass: there is no wine to be had, therefore, he believes, no sacrament is possible! Part of Greene’s point is that God does not depend on the liquid used and that his grace overcomes all physical impediments.

We evangelicals – we who minister the word and sacrament/ordinance with far fewer barriers than that unnamed priest or Martin Luther – have a duty to God and our flocks which we must take up.

[1] My broad paraphrase of Justin Martyr, First Apology. Justin thus rejected the notion, fostered by the rising tide of Gnosticism, that one could dispose of the physical elements of the Lord’s Supper and simply celebrate it “in the abstract”. Irenaeus made a strong anti-Gnostic case on the same point in his Against Heresies, written 20 years later. My impression is that Graham Greene would have sided with Justin and Irenaeus over the Gnostic viewpoint!

[2] See Martin Luther, “Whether One May Flee from a Deadly Plague.” Luther was teaching that confession and the sacrament would prepare the individual to meet death. Whether we accept his particular doctrine, still, pastoral aid, the ministry of the Word, and the Lord’s Supper are necessary to the health of the soul, and spoke very boldly about ministering to our sick neighbors. Thus, “Those who are engaged in a spiritual ministry such as preachers and pastors must likewise remain steadfast before the peril of death.” A side note: Luther also denounced those who didn’t take the plague seriously: “They are much too rash and reckless, tempting God and disregarding everything which might counteract death and the plague. They disdain the use of medicines; they do not avoid places and persons infected by the plague, but lightheartedly make sport of it and wish to prove how independent they are…This is not trusting God but tempting him. God has created medicines and provided us with intelligence to guard and take good care of the body so that we can live in good health.”

[3] The latter plan is being offered by some Catholic churches, in whose theology the priest needs to bless the actual wafers that people will receive, or else it is not the sacrament.

“Do we offer the Lord’s Supper, even when 2 or 3 are NOT gathered? Oh, yes!” by Gary S. Shogren, PhD in New Testament Exegesis, Professor at Seminario ESEPA, San José, Costa Rica

One thought on “Coronavirus! Do we offer the Lord’s Supper, even when 2 or 3 are NOT gathered? Oh, yes!”