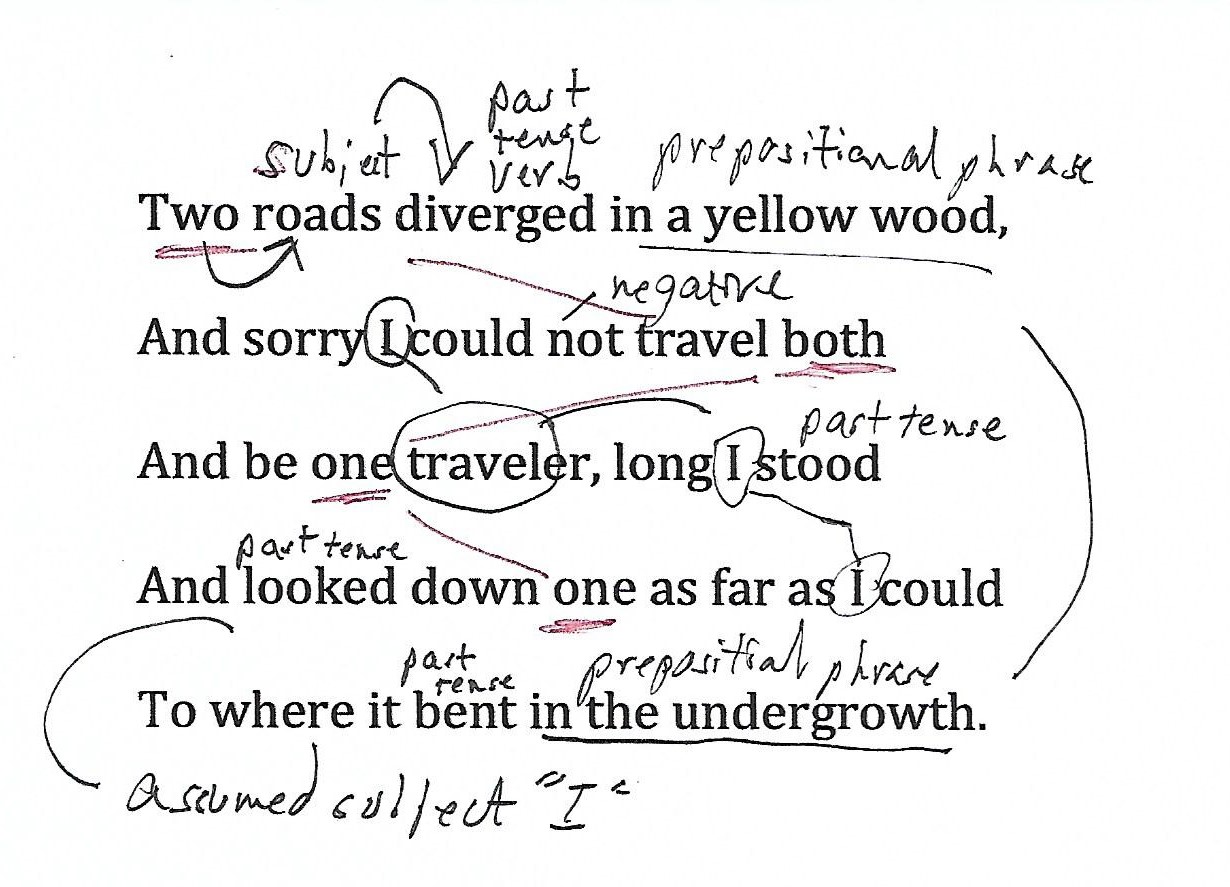 “Morpho-syntactical exegesis”: it all sounds so mysterious! It is not.

In fact, I would go so far as to argue that there is no such thing as morpho-syntactical exegesis as such.

Morpho-syntactical analysis, on the other hand, is a thing.

Such analysis involves the identification and labeling of each word of a Greek sentence as a part of speech: here is a participle, there an adverb, over yonder a conditional sentence, etc. It then culminates in something like sentence diagramming. It is a crucial step, but at the same time is a lower-order stage of exegesis, which is the study of a text in its original language. Such analysis is a help because most of us cannot read Greek sentences with ease and we need to break it down into its components and later re-read it more rapidly.

I read Greek casually for maybe a half-hour a day, and for that I don’t get out the colored pens; but labeling and diagramming are definitely steps that I take whenever doing anything like serious reading of a Bible text.

LET’S BEGIN WITH AN ENGLISH EXAMPLE:

Here’s an example of what morpho-syntactical analysis would look like, if we were studying a poem many of us learned as kids, Robert Frost’s “The Road Not Taken.” I have done the beginning of an analysis of it; more would be needed. 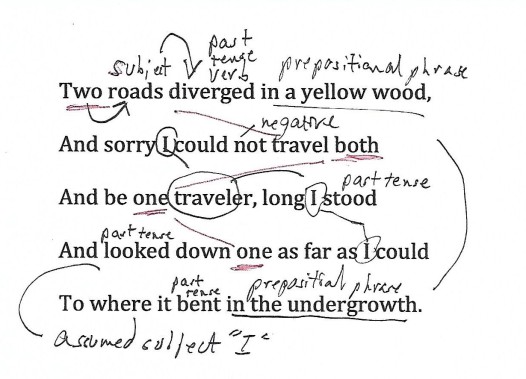 That’s it! It’s no more mystical or cabbalistic than that. And while the information it yields is critical, it doesn’t add up to much. With human DNA it’s the same deal – you can examine the chain and say, Well this one is an adenine, this one a cytosine, but they will never get you to the place where you can answer, “What is man, that You are mindful of him?”

AND A GREEK EXAMPLE:

When I was assigned to write a commentary on 1-2 Thessalonians, the first thing I did was to print out the Greek texts and to carry them around with me, to pull out and study when I could. The second step was to set up my video projector on super wide beam, and to project 1 Thessalonians, paragraph by paragraph, on my living room wall. Word by word I analyzed the text. Arrows, colored lines, underscores, repeated words were circled and connected by arrows – on a computer file, not on the wall!

But wait! According to some, morpho-syntactical analysis is reputedly the Beginning, the Middle, and the End of exegesis! Not so. In the case of Thessalonians, my analysis took a few weeks. But my complete exegesis took the next 2-3 years to complete. So: the morpho-syntactical part was vital, irreplaceable. It was the first 2% of the job, roughly, and someone could argue, the most important 2%! But hardly the whole job of exegesis. Let’s put that in a pie chart: 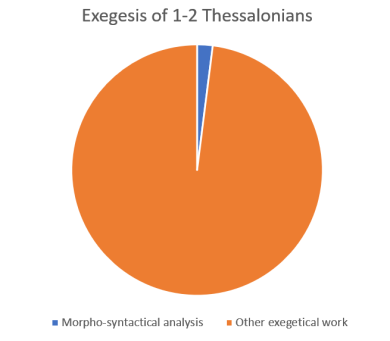 Of course, this is an extreme example – in sermon prep, for example, the analysis of the text would take up a larger slice of the total pie.

WHAT ELSE DOES EXEGESIS INCLUDE? PLENTY!

To return to the pie chart above: if people are going to do the deeper exegesis of the Greek NT, they need to keep pushing, ever learning in the following points. I emphasize these, not because I can claim any level of mastery of them, but because they are goals to which we must all constantly strive: 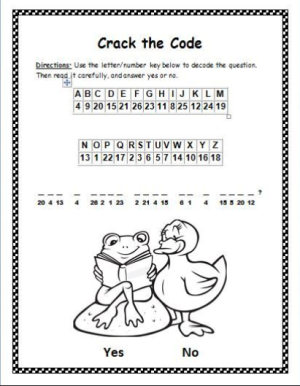 THE LIMITS OF MORPHO-SYNTACTICAL ANALYSIS:

At best, morpho-syntactical analysis launches us on the road to deeper Bible study. At worst, we are merely gazing at the pixels of our TV and missing the “show”.

To illustrate the limits of morpho-syntactical analysis, here is a simple example, from Romans 11:26 –

“And in this way all Israel will be saved…”

Believe it or not, the data that morpho-syntactical analysis mines from the Greek version – important as it is! – is not much greater than the amount yielded from analyzing the English text. If you say “Well, sōthēsetai/σωθήσεται is a third person singular future passive verb!” you have no more information than if you had said it about the English verb “will be saved.” You also have to figure out what “Israel” means in this context; what “all” means (it’s not as clear as one might think); why is “will be saved” a future tense; what “saved” (“saved” as in eternal salvation is the best option, but not the only one!). And how Paul’s statement relates to the double quotation from Isaiah that Paul then gives as proof. And from the Greek there is one special burden: what does οὕτως/houtōs mean (“in this way” above), since it will make a difference in your interpretation and translation.

People who stop at the lower-level steps of exegesis but do not advance to the other necessary levels might fall into “atomizing” the text, that is, reducing it to its smallest elements and assuming that the job is done.

To illustrate “atomization”: some people who want to lampoon anti-vaxxers have circulated a nasty (but I must admit, very funny) parody to show them up: 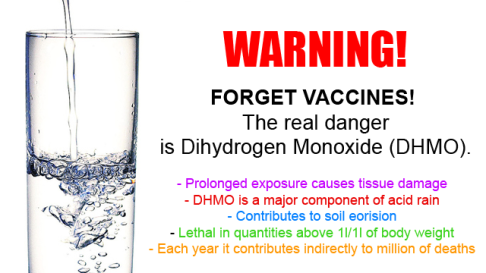 Now, dihydrogen monoxide is simply the chemical term for a molecule that consists of two hydrogen atoms and one oxygen. As in H2O. The joke is, “Don’t let people scare you with ‘sciency’ language, terms which perhaps neither you nor they understand!”

But, we can apply the Water Test to exegesis! A person who says the five words of a verse are A, B, C, D, E, may (or may not) know what the text means in the Greek. He or she runs another risk, known as “reductionism”, the idea that the whole is simply the sum of its parts. One dictionary defines reductionism as “analyzing and describing a complex phenomenon in terms of its simple or fundamental constituents.” Saying that a nuclear explosion is “merely” the fusion of two hydrogen atoms will seem reductionistic to a person who happens to be standing nearby when it goes off.

THE PRINCE OF GREEK ATOMIZATION

R. B. Thieme, Jr., was probably the Prince of Greek Atomization. He is a sitting duck; nevertheless, I will use him as an extreme case for purposes of illustration (I cannot recommend the Wikipedia article on him, by the way, which is “worshipful” to say the least). Thieme took some Greek courses, and founded a movement based on his own “expert” knowledge of the language; he also invented some new doctrines and became a cultic leader to his followers. He was not shy about “correcting” all the Bible versions. Here are some of his atomizing takes on morpho-syntactical analysis, much of which is fake news:

Gary: the “alpha” part is okay; the “omega” comment is pretty much nonsensical.

Batach, translated “trust” in Psalms 37:3, 5 and 91:2, was originally used for one wrestler body-slamming another. From this derivative the word came to mean “pick up your troubles and slam them on the Lord.” (From Thieme, Christian – At Ease!)

Gary: Don’t know where to begin with this one. There is no slamming mentioned in the Hebrew dictionary, which says that batach just means “to trust”. And I hope we will never presume to “body-slam” our Lord.

Gary: No version has “super abundance of happiness.” And for good reason: the Hebrew dictionary says the word means “joy, gladness, mirth.” Note that by posing as a Hebrew expert – which language, as far as I can tell, he never claimed to study – Thieme casts doubt on any Bible but his own “corrected translation”.

The aorist tense of πιστεύω (pisteuo) in Acts 16:31 means to believe once, for all time; the perfect tense of σώζω (sozo) in Ephesians 2:8-9 means you are saved in the past with the results that you go on being saved forever. (From Thieme, The Prodigal Son)

Gary: I believe in eternal security, but out of his two points of the Greek, he is mistaken twice, 0 for 2.

Just as morphological-syntactical data are vitally important – if they are defined correctly in the first place, and not made-up, as in the above examples! – they are one primary step. In the same way, diagramming “The Road Not Taken” cannot tell you what the poem means! Otherwise we might even end up with an interpretation of the poem that might sound like this: “two” – that means duality, reminding us of yin and yang; “roads” – Jack Kerouac wrote the ultimate road book, On the Road, so perhaps Frost is saying that we should pick one of two of the roads that Kerouac took, the railroad or the motor highway. “Diverged” is a past tense of “diverge”, that is a past action that had continuing results; and since in mathematics a “divergent series” is an infinite series, Frost must have been saying the two roads continued on into infinity. “Sorry” is from the Old English sārig, which means “pained, distressed”, that is, Frost was literally in pain.

(Hold on! Come to think of it, I have heard sermons that ran just like this!)

People who interpret the Bible this way have a “magical” view of the text, which leads them to the false conclusion that there can be only one correct way to read a Bible verse, that an (in fact, superficial) knowledge of the language is enough to clear the decks of all competing interpretations. No! Hebrew and Greek are simply not magical languages; the cure for that false notion is to know them better and read them often!

With the Bible too, morpho-syntactical analysis, when done in a balanced way with accurate information, is a start – an excellent start! – but it is not Hebrew or Greek exegesis, it is not Bible interpretation.

2 thoughts on “‘Morpho-syntactical exegesis’ – Is it a thing?”