You go down town to the park where there are always people begging for money; selling something; preaching some message. So you circulate around to see what new doctrines are in the air.

Over there is a new guy, talking earnestly to a small group. You pick up a few words of his discourse: “Now you must understand that the heart of my message is” …and he rips out what you could have sworn was a dirty word!

You do a double-take, and draw closer. Sure enough, it happens again: “The truth is that the power for living, being right with God, and eternal life comes only one way, through &#)#*%^@” – and he utters a filthy word.

You might even shout back: “Hey buddy – there are kids running around here, there are ladies present; can’t you talk about something more pleasant than that word?”

My point is that, that is how it would have seemed in 1st century city like Corinth or Philippi, if you had run into a man who calls himself Paul the apostle.

And his dirty word? It’s one of the first vocabulary words my students learn in Greek 1, this because it is used so often in the New Testament: 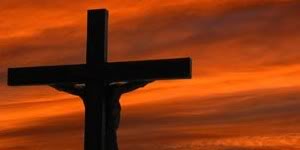 In the Roman empire crosses took various shapes – X, T (which looks like the letter tau in Greek), and the traditional cross. It was probably the latter on which Jesus was crucified.

But let’s go back to that public obscenity. It is revealing to study what a society regards as obscene language. In English our “dirty words” usually have to do with sex, sexual organs, or toilet words. But in ancient Rome one of the very worst obscenities was “I in malam maximam crucem” = “Get really badly crucified!!” It was a shocking profanity.

And oh, there was a gesture that went along with it! If someone cut you off in his chariot, you might make the sign of the letter tau right back at him. It looks like our “time-out” sign; and it would mean, “Hey buddy! Get crucified!”

So, let’s say, you are at a fancy Roman banquet, and someone has had too much wine to drink. He starts to tell everyone that joke that starts, Okay, so, two guys are on their way to get crucified, and one guy turns to the other and says… Does your hostess say “Oh, let’s talk about something more pleasant?” No! She probably exiles him from her table, forever!

Now, imagine preaching a message that involves an good strong four-letter word – that was Paul’s mission. He said it himself – his message could be summed up as “Jesus Christ and him crucified.” (1 Cor. 2:2).

Crucifixion was for slaves and rebels, for example like Spartacus. Roman citizens had as one of their rights that they could not be crucified. The philosopher and statesman Cicero (1st century BC) said – “Let the very name of the cross be far away not only from the body of the Roman citizen, but even from his thoughts, his eyes, his ears.” This law explains the tradition that Peter was crucified upside-down, but Paul was killed more humanely, by beheading.

Paul dealt with this every day of his mission. As he said in 1 Cor. 1:22-23 – “For Jews demand signs and Greeks seek wisdom, but we preach Christ crucified, a stumbling block to Jews and folly to Gentiles…” He was not exaggerating about how troublesome his gospel language sounded.

How was the, uh, ehem, “cross” a stumbling block for the Jews, something that naturally made them trip? They look forward to a powerful Messiah. Jerusalem was overrun by Gentiles, and they wanted to see some sign that God was on their side. One rabbi disagreed from another, but all agreed that the last person who could be the Messiah was a crucified criminal; that’s why they objected to the sign over his cross – “Jesus of Nazareth, King of the Jews” – equal to “Christ crucified”.

And the cross is “foolishness” or “folly” for Gentiles (non-Jews). A religion about a crucified man was a religion for moron slaves who didn’t have the sense to come in out of the rain.

There was a man in the 2nd century AD who was a famous enemy of the gospel. Cornelius Fronto – wrote anti-Christian propaganda (and I paraphrase) – “Their ceremonies center on a man put to death for his crime and on the fatal wood of the cross. Just to recall this out loud is to assign to these abandoned wretches sanctuaries which are appropriate to them and the kind of worship they deserve.”

It’s human nature to prefer a nicer, more polite religion. One in which you fill out a few forms, wear special hats, pledge allegiance to a few ethical ideas, and derive maximum serenity from minimum exertion. It is highly improbable that anyone would invent a cross-religion. As Lewis said in Mere Christianity, “[Christianity] is a religion that you could not have guessed.” God did an end-run around human common sense, since “it pleased God through the folly of what we preach to save those who believe.” (1 Cor. 1:21).

Since the 2nd century, the cross has been the most common symbol of Christianity and the most proof that God cares for us and sent us salvation in his crucified Son. Today, one of the most popular names in Greece is Stavros: imagine naming your baby boy “Cross”, unless you have found out that the cross really means for the human race!

“We preach Christ crucified” said Paul (1 Cor. 1:23), because we “who are called, both Jews and Greeks,” see the truth, that “Christ the power of God and the wisdom of God.” (1 Cor. 1:24). And we have seen firsthand, that this message of the cross is what led directly to a miraculous, radical change of direction in our lives.

But if you look at certain TV evangelists or pop preachers, and ask them, how can I get my life transformed? I want to be a new person? Way too many miss the cross completely; it’s almost like it’s a dirty word for them!

Here’s an example I chose at random from one of America’s most popular preachers. It’s from a book called Your Best Life Now: 7 Steps to Living at Your Full Potential. What steps are these?

I guess there’s nothing wrong here, exactly, it’s common-sense wisdom for our day. But it’s not God’s wisdom. This mimics Christianity, but it is not Christianity. For our faith is not a list of pointers, not an ethic, not a Golden Rule, not a liturgy, but a man undergoing capital punishment, execution on the, well, you-know-what. This should be a reprimand to those whose lives are centered on the latest theory of who is the antichrist; or on living 1% more in accordance with the Torah; or trying to be more-Reformed-than-thou (say I, a Reformed person); or promoting one version of the Bible as the only acceptable one. If the cross doesn’t reside at the focus, then we are missing the whole point.

If you share the gospel sooner or later you have to focus on Jesus Christ crucified for us – if that element isn’t present, and even if it isn’t predominant, then whatever we’re saying, it’s not the gospel. And it will not change anyone’s life.

“So Paul,” someone will ask, “Are you saying that of all the events in this world’s history, the one big event that actually changes people’s assumptions and behavior and emotional reactions and motivations, that it could possibly be the execution of Jesus in a remote place and time?

That this is the big move, this is God’s plan to reconcile people to him and transform them?”

And Paul would answer – “Yes. Yes. A thousand times yes.”

May that be our answer too.

And being found in human form, he humbled himself by becoming obedient to the point of death, even death on a cross. Therefore God has highly exalted him and bestowed on him the name that is above every name, so that at the name of Jesus every knee should bow, in heaven and on earth and under the earth, and every tongue confess that Jesus Christ is Lord, to the glory of God the Father. (Phil 2:8-11)

Hengel, Martin, Cruxifixion in the ancient world and the folly of the message of the cross, SCM, London, 1977.