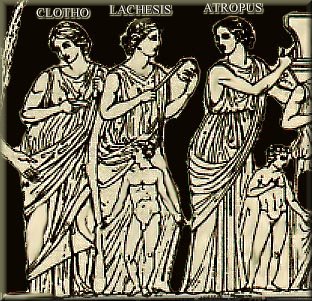 I occasionally visit an English-language church in San José, attended by African-Caribbean believers. For me, their English is harder to understand than most Spanish.

A few months ago, a lady behind me was leading us in prayer, and for a heart-stopping 15 seconds I thought she said that we Christians “live according to Fate.” What in the world…? Then I realized that with her accent the “th” sound comes out as “t” – ah, that’s better, she said that we live according to faith. Phew. One the truth, the other not, and just one letter separating them.

Two philosophies vie for our attention. One is Fatalism, the belief in Fate: qué será, será, whatever will be, will be.

And so, for example, a girl asks, Will this boy like me? and her friend answers, “Well, I believe that if it’s meant to be, then it’ll happen.” Into this category of Fate we can also throw other odds and ends: astrology, Mayan Calendars, Nostradamus. But some Christians view the world that way: “If it’s God’s will, it’ll happen, if it’s not, it won’t, so relax, what will be, will be.” Listen, I believe in the Sovereign God, but we sometimes act as if “God’s Will” is binding on God himself. “God cannot act contrary to his will,” to be sure; but that doesn’t mean that his will is a straitjacket.[1] Part of this error is the idea that prayer does not change things, but only changes the attitude of the pray-er to accept what would have happened anyway. More about prayer later.

The equal and opposite philosophy: “My future is not mapped out, I’m the one who decides how I’ll turn out. I am free to choose, and I am the sum of my choices. I have the power within me to create the person I want to be, free from outside compulsion.” Let’s put the Oprah Book Club favorite, Rhonda Byrne’s The Secret, in this group. Thus, when the successful businessman is congratulated on his good fortune, he retorts, “I believe we create our own luck.” This  philosophy, made popular by Sartre, could sound reasonable to the person who has enough to eat, a roof over their head and has no threatening disease. It makes little sense for people driven from their homes by drought, living as refugees.

The Christian message includes a Sovereign God, but rejects Fate; it teaches the importance of individual decisions, but denies that we create our selves. The gospel way is “faith,” that is, placing less and less confidence in our ability and more trust in a merciful and kind God to guide us. It tells us that when we pray, we speak with the Most Free and Sovereign God, who in love and power can hear and respond to our prayers.

When Paul talked about his prayer life, he showed how a Christian turns to God in faith: “We constantly pray for you, that our God may make you worthy of his calling, and that by his power he may bring to fruition your every desire for goodness and your every deed prompted by faith” (2 Thess 1:11). That’s how we should pray about ourselves, and for people around us, knowing that there is a God who can and will change things as we ask him to.

Live by Fate? Live by our own decisions? There lie different, but equally unsatisfying, dead ends. Trusting in God is the way of life.

[1] In ancient philosophy, God/the gods themselves were bound by Fate. They had a limited measure of movement within Fate, but in the end they could not resist it. Fatalism is sometimes confused with “Calvinism,” but in fact the two are poles apart. When Calvin was called a Fatalist, he shot back that he was nothing of the sort: Fate “is a necessity springing out of a changeable and complicated labyrinth, and binding in some measure God himself. Instructed by the Scriptures, I define predestination as the free counsel of God, by which he regulates the human race, and all the individual parts of the universe, according to his own immense wisdom, and incomprehensible justice.” John Calvin, On Secret Providence (trans. John Lillie; New York: Robert Carter, 1840), xi–xii.